Mosaic Art on the Underground I-London

London Underground has been running for 156 years since its opening on January 10th 1864. London Underground always receives numerous praises not only because it satisfies public demands for effective transportation, but also contributes much to the field of creative arts in the UK, especially public art. So far, London Underground system has become a free exhibition center, and within which a prominent case is the mosaic of Tottenham Court Road designed by contemporary British artist Eduardo Paolozzi (Figure 2). 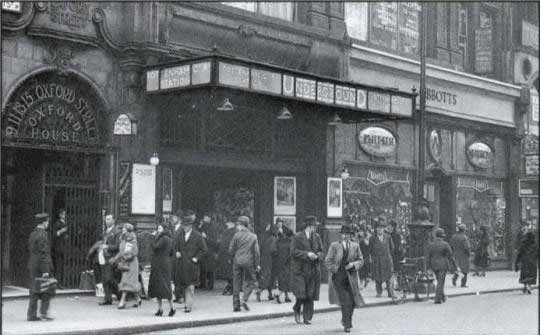 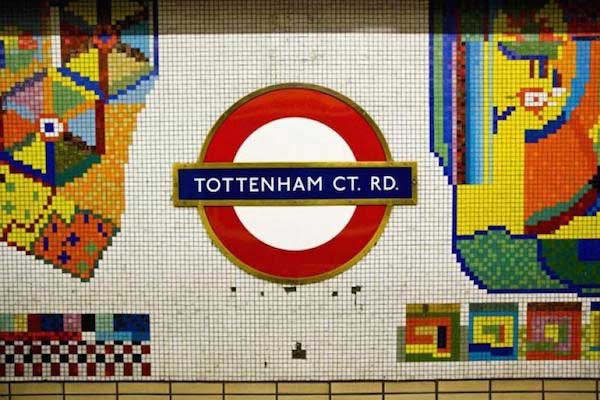 Tottenham Court Road is a cross station between the Central Line and the Northern Line. Passengers would be astonished at the splendid mosaic decorations on walls of the underground station. Tracing back to the early 1980s, Paolozzi was commissioned to design decorations for the 1000-square-meter wall of the station, which covered the ticket hall, the automatic stairwell, the pedestrian path, and the platform. With his unique taste and wild imagination, Paolozzi completed the task successfully.

Nowadays, when you enter the station at the southeastern corner between Tottenham Road and Oxford Road, you will see the first wall of mosaic decorations, but it was actually restored recently in 2016 (Figure 3-5). Then, you will see elaborate mosaic patterns covering the entire station. Themes of these mosaic patterns originate from daily urban life and nearby landmarks, including but not limited to passengers, roosters, dogs, gears, satellites, musical instruments, the British Museum, and the Architecture Association. All these are long-lasting interests and concerns of Paolozzi (Figure 6-7). 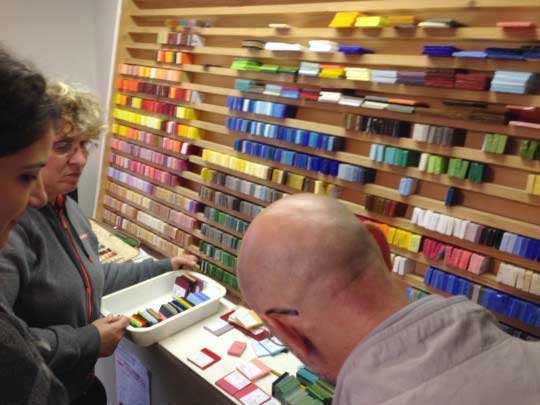 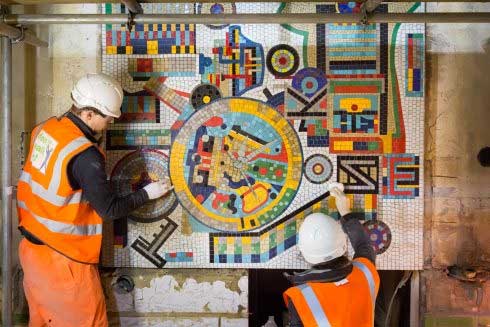 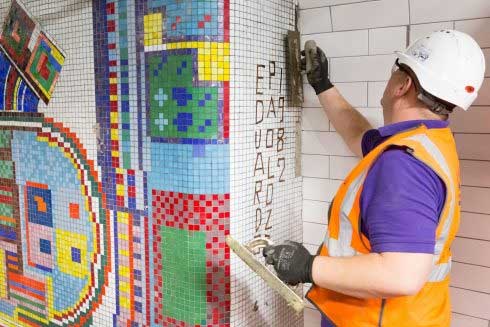 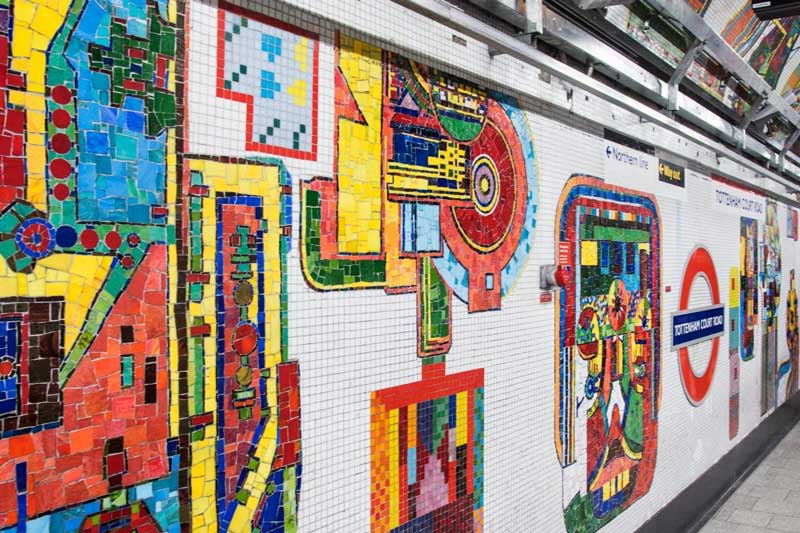 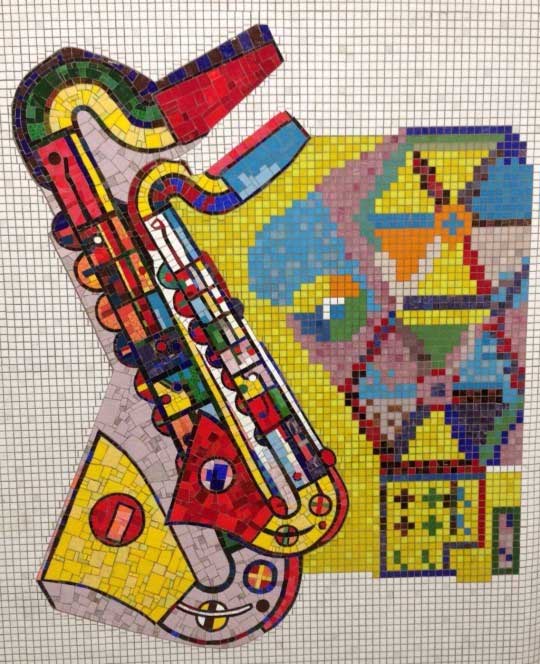 Paolozzi is famous for integrating mechanical blocks and other ready-made objects into new unities. A prominent symbol of his artworks is mechanical figures and scenes (Figure 8). As you can see, those complex scenes in surrealist illusions just exist on mosaic wall paintings of Tottenham Court station, which present the collision between nature and science. 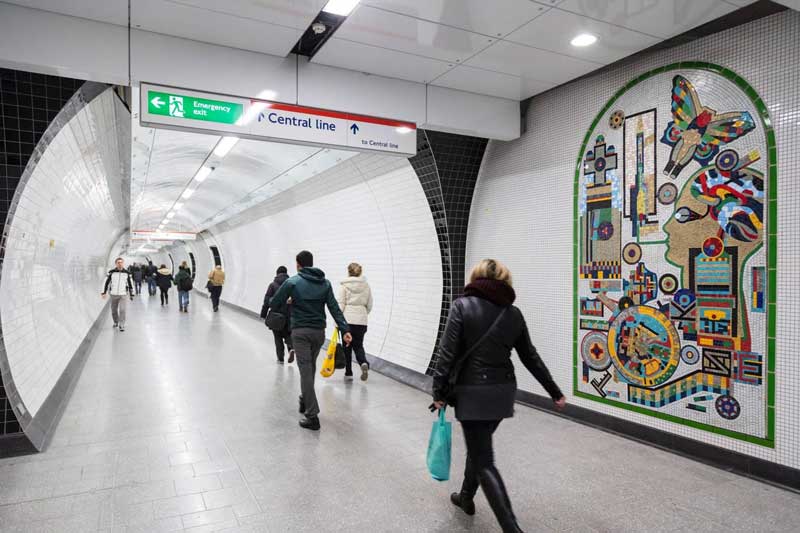 When you go through the ticket hall, you will immediately find the abstract mosaic pattern at the automatic stairwell (Figure 9). Then, after entering into the rotunda, you will see Paolozzi’s signature and date of creation on the wall. Here, there is also a running man mixing with other items, such as a mask, a cow, and a hen. Besides that, the Central Line platform and the Northern Line platform have different styles, as the red Central Line has a more gaily and gorgeous mosaic design, but the red Northern Line is decorated with much more rough and loose mosaic grids, just like a labyrinth (Figure 10). 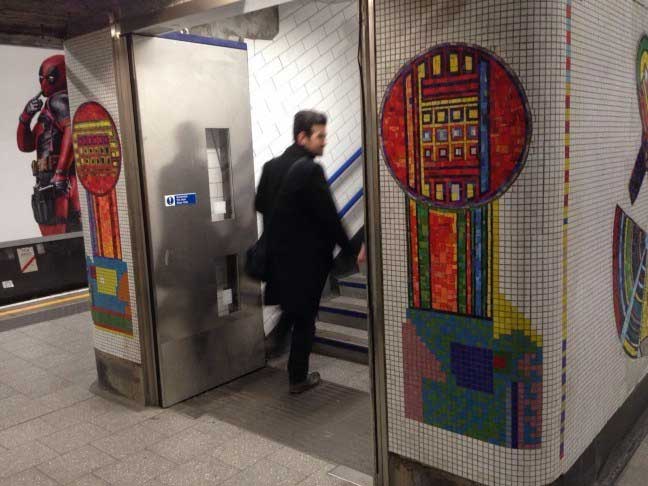 Figure 9. Mosaic at the stairwell of Tottenham Court Station (Source) 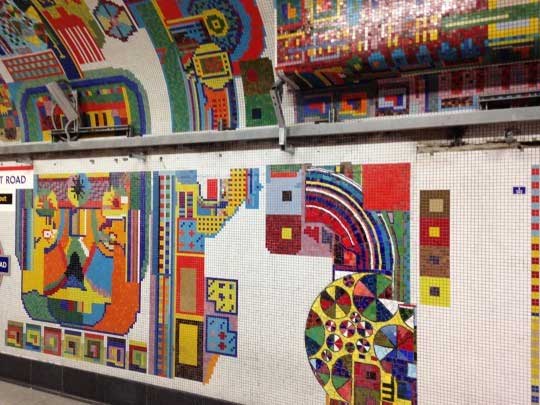 You may wonder how the artist could master such a giant project. According to Paolozzi, he used electrostatic copier to zoom in or zoom out patterns, and then changed original colors through duplication. He positioned the entire artwork between permanence and temporality, between evolution and suspension, and between mechanical coldness and ordinary human activities. In a word, mosaic wall paintings at Tottenham Court Road station bring both visual and mental pleasure to pedestrians.

The mosaic on London Underground is just like an intriguing comic book with abundant themes and colorful pages. Everyone could discover an epitome of the beautiful life in their dreams from it. However, instead of only being a dream, Paolozzi has made everything into visual symbols in reality. Today, basic realities of urban culture and his mosaic artworks have integrated into a modern tide in underground tubes of London.

Your email address will not be published.